What is Painting, Anyway? 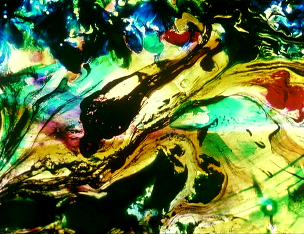 Last weekend, we considered the question, “is painting dead?”. However, this was only a cursory glance at a far more expansive discussion because what is painting anyway? Who decides what the definitive features of a painting are? Is there some omniscient fine arts deity establishing unbreakable categories for artistic expression? I am sure many art critics out there like to think so, but, ultimately, inflexibility and art do not mix well.

Speaking for myself, I do not believe there is any inherent meaning to our lives other than the gift of existence and what we do with it. One could accuse me of nihilism, and in many ways, they would not be wrong. However, mine is a happy nihilism. We do not need an outside source to give us meaning. Instead, we have the wonderful and terrifying privilege of creating our own purpose; the "reasons" for our lives are not provided to us; they are found and made.

The maddeningly complex but equally rewarding philosopher Søren Kierkegaard called “anxiety”, “the dizziness of freedom.” This definition has always stuck with me. A sentiment I have often experienced and heard echoed by many others is occasional envy for domestic animals. When the many weights of the world particularly stifle me, I wish I was my cat. I watch Kitty (a terribly inventive name, I know) engaged in a characteristically odd and indecipherable feline activity or simply basking in the sun and reflect on how simple and happy a life she must lead. Unbothered by the agonies of human consciousness and free from “the dizziness of freedom”, she simply lives without questioning why. She does not need to find meaning, the desire to do so has never occurred to her, and her emotions are simple. It is hard in certain moments not to imagine she experiences a level of happiness I will never know. In such moments we remind ourselves that she is helpless without us. We comfort ourselves with the knowledge that at least we do not have to wait for another to allow us to use the bathroom or eat dinner. The very thing that makes us envy the cat is how we affirm the superiority of our existence over theirs: we envy their freedom from the many worries our freedom engenders. Ultimately, the cat is freer than the human because it is free from the pesky idea of freedom. With all this out of the way, I should probably do my job and start writing about art. But that's the thing: you can't write about art without writing about life, specifically human life.

If anxiety is one of the drawbacks to the freedom of consciousness, then art is one of its greatest benefits. Art is one of the few things that remain strictly in the purview of humanity. No matter how smart: no dolphin, elephant, or monkey has ever consciously created art (tropical birds' mating dances are probably the best performance art in the world, but they don't know that, so it isn't. consciousness is what separates art from spectacle, not beauty.). So, my question is, if consciousness and the freedom it bestows are the instigators of our deepest woes and our most incredible accomplishments, why not lean into them? The anxiety of freedom is unavoidable; we are born with it, and we will die with it. However, the creative possibilities it offers are not guaranteed. If I’m not going to be free from my freedom, I’m damn sure not going to let people limit my curse-like blessing of consciousness.

What a stupid question, “is painting dead?” I’ll give you an answer when you tell me what exactly you are asking me. Before the canvas was invented, people painted on cave walls. Before oil paint, people used a mixture of egg yolks and raw pigment. So, in contemporary times what right has anyone to say a work composed on a computer is any less a painting than watercolors on canvas? Why does a painting have to be still in the first place? Are Stan Brakhage’s intricately hand-painted abstract films not paintings, and if so, then painting is very much alive (literally, moving before our eyes). The opinion that painting has deceased can only be formed by a mind shackled to pre-established parameters. I like to think painting is still in its infancy, and it will be as unrecognizable to me in 60 years as a Frank Stella would have been to an impressionist. Creativity only dies when we take away the freedom that inspires it.