From NFT skeptic to NFT enthusiast in 300 clicks 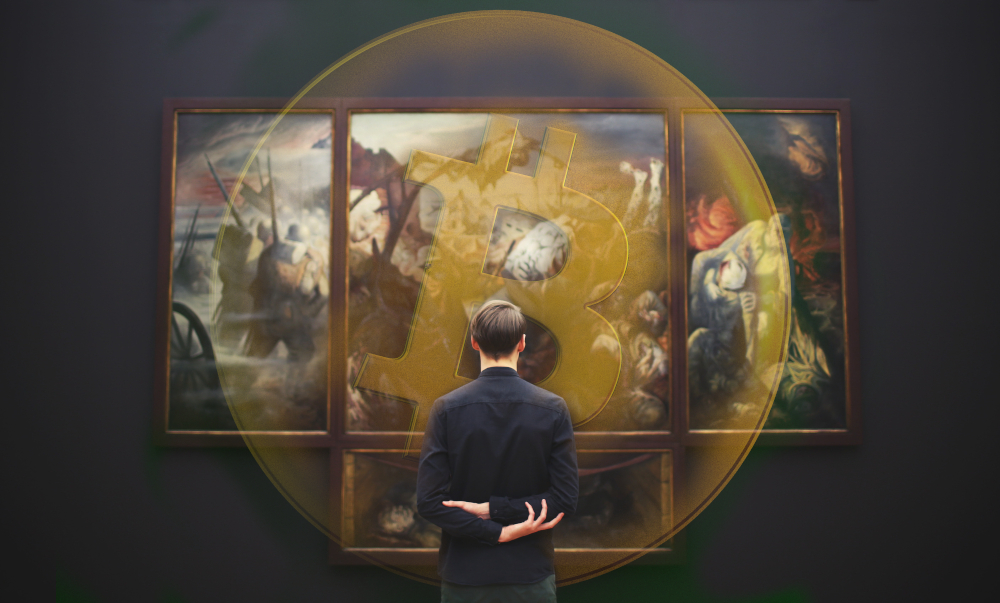 I've been on a long journey that started back in 2007 though I didn't know it at the time.

It began when I first heard about cryptocurrency.

A decentralized financial network that was going to take power away from the banks.

That was quickly followed by the Occupy Wall St movement.

In 2011 I even set up my website to accept bitcoin for my art.

As is the way of things, life moved on and I forgot about the whole thing. Cryptocurrency would pop up every now and then but not enough to make me go looking for my bitcoin.

By the way, if you think I'm writing this from a golden throne I bought with my bitcoin, I'm not.

When bitcoin reached the sort of prices that made me actually go looking for where they were, I couldn't find them anywhere.

I still haven't found them.

That's all I can remember from when I bought them.

Are you familiar with them?

I don't know about other people but my, "safe places," are often so safe that they are protected even from me.

It's as if I locked the bitcoin up somewhere and threw away the mental key.

Between you and I, at this stage I'm considering hypnotherapy to help me remember where the, "safe place," I put them is.

But that's not what this story is about.

18 months ago I started to hear about NFTs.
"They are the latest thing."
"The next big deal in art."
"An NFT just sold for $69 million dollars at Sotheby's."
"They are so complex, they operate on (hushed tone) the blockchain."

I don't mind telling you, I was miffed.
NFTs were being explained to me as if I were a toddler.
Yes, I know about blockchain technology.
Yes, I know what a Non Fungible Token is, or NFT if you must abbreviate everything.
I'm a crypto veteran for God's sake.
I own two bitcoin.
Since 2009.
They are in a very safe place.
Stop laughing. 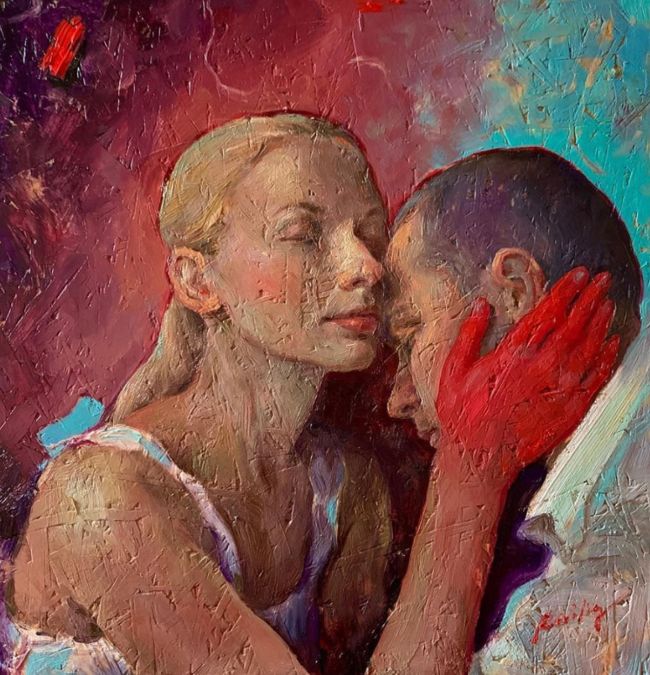 Warm Me Up by Tania Rivilis

Around that time it was becoming clear that the amount of computation required for cryptocurrency trading was consuming so much power it was having a negative effect on the environment. NFTs were lumped in with everything else crypto, so when they appeared in the art world and people started losing their minds about them I wasn't that interested.

In February I was getting ready to record an episode of the podcast with a Russian artist called Tania Rivilis. I thought her paintings were fantastic and that she would make a great guest.  As I did my research on Tania, NFTs kept popping up.

Odd? she is a very traditional painter.

It dawned on me that not only was Tania a great painter, she was also heavily involved in NFTs.

As you know, I am an open minded person so when it came time to record our conversation I put my environmental concerns to one side and got on with having the chat with Tania.

It was a lovely chat and you can listen to it here.

By the time the conversation was over I was hooked.

I began to investigate NFTs further.

Tania explained that the community of NFT artists and collectors were all on Twitter. That was where they connected and communicated.

I was surprised to hear this. Wasn't Twitter toxic?

I had drifted away from Twitter years beforehand when it became super negative and attack.
(Yes, that's a word.)
(Okay yes, I made it up.)

Tania assured me the NFT community were lovely and there was no atacking going on, so I defrosted my Twitter account and dipped my toe in the waters.

I have to say, I was very pleasantly surprised. There was a lovely atmosphere of support and encouragement among the artists and collectors on Twitter.
And the art!
The art was fantastic.
Across all genres, digital, phographic, animated, and traditional painting.

I began to find artists I knew there too. 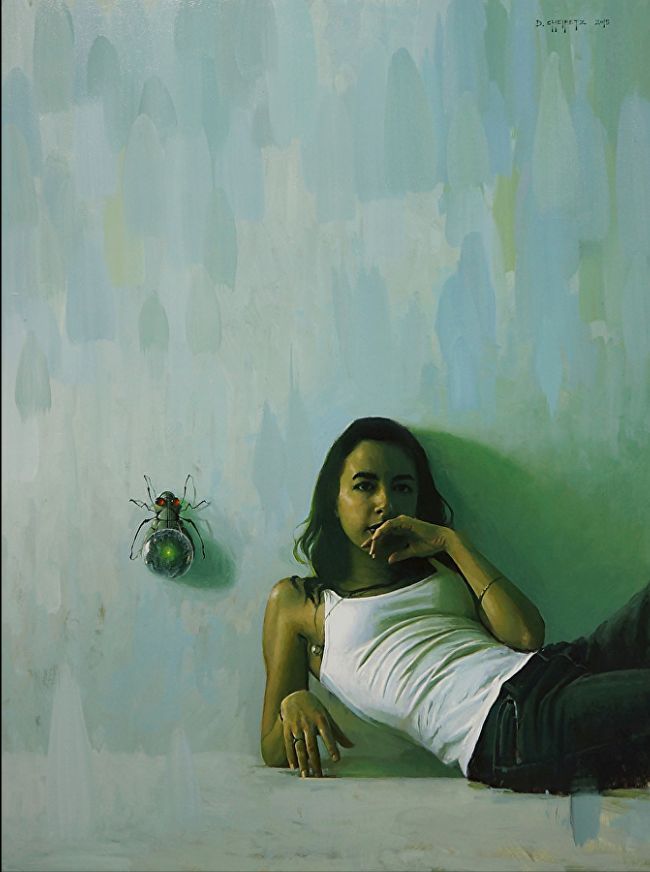 David Cheifetz is a fantastic painter and has been on the podcast a number of times. You can hear my long chat with him here. He is a wizard with a pallette knife.

And there he was on Twitter!
With NFTs and collections, and creating art with AIs, and he had been doing it for the last 18 months! 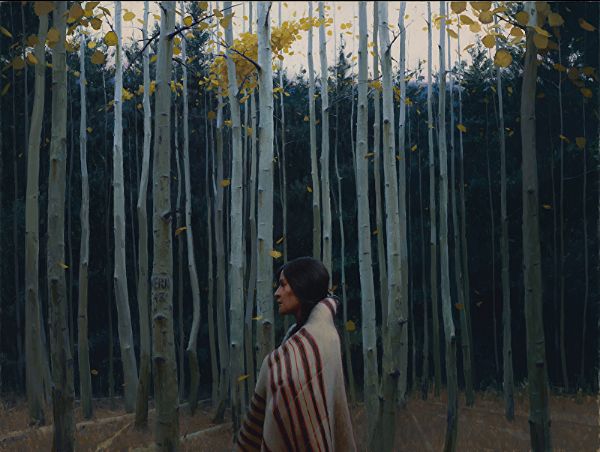 The Turning by Jeremy Lipking

On another day I saw that Jeremy Lipking was on Twitter also and not only that he was releasing NFTs of his work.

As an aside, I had been trying to get Jeremy on the podcast since 2016. I had tried all the usual ways I have of getting in touch with artists - emails - direct messages - friends of friends - nothing worked.

I don't mind telling you, and this was a strange feeling for me but I began to think he didn't like me.

When I saw that he was on Twitter I sent him a direct message inviting him to be a guest on the podcast. I thought it would go unanswered like all my previous attempts to connect.

Remarkably he answered within a couple of hours.

We went ahead and recorded a lovely interview a couple of weeks later. You can hear it here.

Turns out he is lovely and likes me very much.

I quickly realised that the environmental issues were over exaggerated for NFTs and that some types of NFTs had no impact at all.

I became convinced that NFTs were a viable source of extra income for artists and also, and maybe more importantly, a way to access a whole new collector base for their physical art.

Think about that for a minute.

Through the NFT community you can easily connect with collectors and build a good relationship with them. These collectors are often young. They may begin by collecting your NFTs but as they grow and have more money they can begin to collect your physical paintings also.

This isn't a hypothesis on my part I see it happening every day.

As I was figuring all this out artists were getting in touch with me asking about NFTs and how to get started with them.

So all this culminated into my singular idea.

What if I use myself as a guinea pig and go through the process of creating and selling an NFT and bring the podcast listeners along with me step by step.

I asked Tania and David if they would be my guides in this process and they agreed.

I have since taken those sections and added them together into one growing episode.

The idea is to give traditional painters a very practical step by step guide to selling NFTs. To go from knowing nothing about NFTs to selling their first NFT.

So far the feedback has been great. Artists have been getting in touch letting me know how helpful they have found it.

So that's why I'm telling you.

Here is the episode for you to listen to.

I hope you find it helpful too. 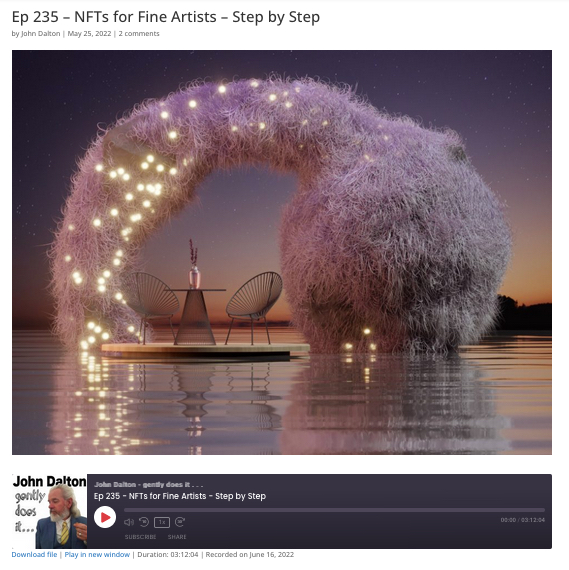