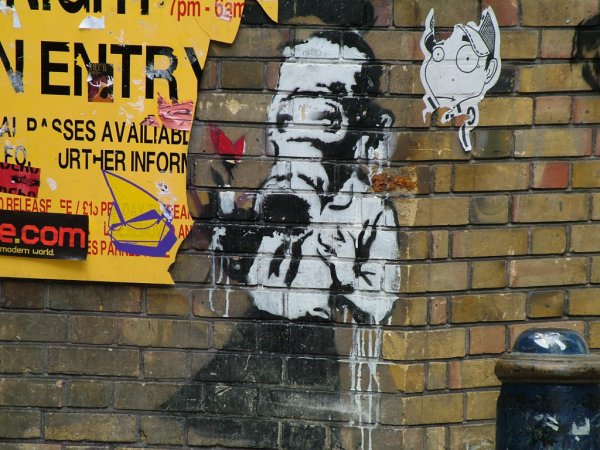 Once loosely defined and widely rejected by the art world's gatekeepers, street art has taken on a more precise visual meaning. We have almost arrived at the point where “street art” refers to a specific style that oscillates somewhere between Jean-Paul Basquiat and Banksy. But street art is a category and not a style. Designating it to a particular style is like making painting and Impressionism synonymous at the expense of every other painterly approach. Even so, street art’s reach is beyond the scope of a single medium. This is not unusual (there are minimalist sculptures, paintings, and experimental films), but the degree to which it has been pinholed is unusually rigid.

I admit that before I learned more about the wide-ranging variations of street art, I was not a fan. It seemed like an echo chamber of people making endlessly derivative work. Its provocative and courageous narrative provided more value than the quality of the work itself. And the subversiveness of its application seemed to have become a veneer when removed from the street and sold for millions at auction. I think (emphasis on “think”) I was a little right but mostly wrong (probably true of many of my opinions).

Number one, and most importantly, I cannot, nor should anyone, fault any artist for wanting to make a living. Subversion will not keep the lights on or fill your belly. It is deeply unfair when people (earlier iterations of myself included) disavow street artists who manage to profit from engaging with the establishment rather than starving to death, heroically challenging it. No one immediately rejects artists of almost any other medium and style because they make a living off their work. Street art is uniquely prone to such criticism because rejection of commodification and subsequent conformity is baked into its DNA. A minimalist painter, who holds the same beliefs as the street artist but confines their practice to the studio, is not labeled a sellout when they sell their work to a billionaire. However, a street artist who once wrote on the facades of the billionaire's buildings but now sells their work to the owner of the facades is invariably discredited. This is really stupid. The history of art is the history of subversion. Street art may be more explicit in its anti-establishment message, but it is mirrored (in one way or the other) in every other artistic movement. Faulting street artists for profiting from their labor is akin to faulting people for honesty. Simply put, we would not get any of the subversive value of street art if all street artists starved to death.

Number two, I did not know what street art was. The first artists with substantial ties to street art, who gained the acceptance and attention of the art world, were a few Neo-Expressionists in the 1980s. Chief among these fortunate few were, undoubtedly, Basquiat and Keith Haring. Basquiat was an incredible painter who—love him or hate him— stayed utterly faithful to his vision, was as derivative as Joan Mitchell (read: not derivative), and left an indelible mark on painting that continues to inspire new generations of artists. I will refrain from delving too far into his oeuvre because, like street art, Basquiat is a category unto himself. Haring, on the other hand, is not. Haring was a great artist; I am not crazy about his work, but the degree of love and emulation it inspires in the art world and beyond speaks for itself. Still, his story is less poetic. I cannot possibly understand how anyone could compare his work to Basquiat’s, but that is only an opinion. However, the creative integrity attributed to his artistic expression is not as simple as an opinion.

Haring was famous for, and most certainly created, the more figurative images (the radiant baby, barking dog, and falling people) in his work. However, a young and terminally underappreciated artist, LA II, painted the surrounding spaces with densely packed symbols of his own. LA II's genre-defining art, his gestural mark-making, and his cultural background would prove to be a quintessential influence of, and undeniably tied to, Haring's compositions moving forward. Although this partnership was celebrated at the time, the unfortunate fact is that LA II has been largely overlooked as a crucial figure in the history, development, and impact of Keith Haring's oeuvre. As a studio artist new to NYC and originally from Reading, Pennsylvania, Haring would not have moved through the street-art community as fluidly (or arguably at all) without the guidance of Angel Ortiz. By all accounts, Haring treated LA II as an equal, not an assistant. Still, the fact remains that many painterly aspects of Haring's work have been entirely uncredited to the artist from which they originated.

Ultimately, my point is two-fold: street artists have just as much right to profit from their work as any other artist, and the nature of their work and the communities from which many of its practitioners hail actively detract from their ability to monetize. So, let's flip the script. If street art is inherently subversive, let its consumption be as well. Don't buy a Banksy; buy a work by an unknown or underappreciated street artist. Street art only loses its bite when it becomes the purvey of a few and not the masses.

I live in Palma, Mallorca where there is an incredible street art scene, there is a freedom to street art that is shaped by the artists thoughts. I come from a town called Swansea in Wales where Banksy stamped a piece of his work to a garage in Port Talbot (30 mins away from Swansea). This was not only a surprise to the community but it also created divisions, most appreciate the art work and were excited to see a 'real life' Banksy, but some people were like vultures trying to pursued the owner of the garage to sell it to them, others tried to destroy it.

His notoriety is so big now I don't know if that is a good thing or not because his statements are felt massively through communities for the better and for the worse.

Lastly technology seems to have an impact on street art as it is in most places an illegal act, which is another obstacle artist have to overcome. Coming from the UK CCTV is prolific on the streets however in Palma particular the old town CCTV is not so common this allows the street artists the freedom to choose there walls to create, with this comes street art politics within the graffiti world, where tags, comments and targeting fresh graffiti as place to produce your new work creates divisions and unities with the graffiti world.

I find that has you mentioned the art establishment are often the gate keeps to the art world and this can have a detrimental effect that often deny the artist their space to engage with wider audiences and communities and this needs need to change to support artists to make challenging, risk taking, amazing art.