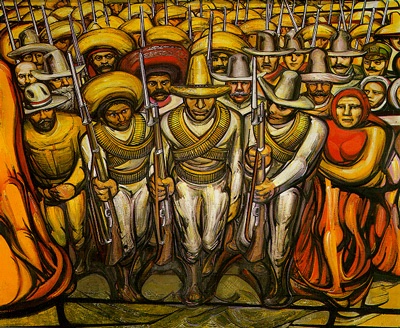 Art and politics have a long-standing relationship. No matter how despotic a regime, no government can withstand the overwhelming hatred of the populace. All of the worst totalitarian administrations in history enjoyed a degree (usually waning with time) of popular support. We look back on the horrifying crimes of the Nazis with incomprehension. How could people support such openly horrendous politics? The multitude of answers to this question are too numerous to recount, but art, and the cultural control it wields, is a good place to start.

Let’s momentarily take a step away from extreme examples and look inwards. How do we arrive at the cultural and widely political views we hold? It is easy to look at Nazi propaganda films like Leni Riefenstahl's Triumph of the Will and recognize them as obvious tools of mass manipulation. However, is our own culture utterly devoid of propaganda? I do not pose this question as a comparison between two equals; of course, none of the artistic propaganda I will discuss in the following article is as evil and insidious as Nazi propaganda. I only use extreme comparisons because it can often be helpful to understand the subtle through how it mirrors the extreme. Furthermore, many of the ideas and narratives our culture industry communicates are not inherently wrong, and many readers may agree with some of their messages. The question is: why do they agree?

Hollywood is the most apparent and globally propagated cultural producer. In America (and everywhere else, for that matter, censorship depending), we are bombarded with an endless stream of movies and TV shows that spread occasionally diverging messages. However, despite the seeming political diversity of creative content, there is a nearly unanimous thematic commonality. There are good and bad guys. Sometimes the bad guys are the government, sometimes the opposite. Still, the lessons we receive are usually the same: we live in a fundamentally moral society that has strayed from its morality because of evil influences. Rarely are we presented with a film that genuinely questions the foundations of the systems of power that preside over us. Instead, we are told that only those running the system and not the system itself are to blame for injustice. Whether or not one agrees with this assertion, it is hard to deny that most films and TV shows ultimately advocate for tweaking the status quo (some even support it without criticism) and not dismantling it. But what about rom-coms, comedies, and interpersonal dramas that do not overtly relate to politics?

One could argue that feel-good and unassumingly entertaining movies are among the most effective means of cultural control. We can spend a third of our lives working at a job we hate and suffering under systemic injustices and descend into depressed apathy instead of rising into a movement towards radical change. How can people be so indifferent to their own mistreatment? How can people be mistreated and not even recognize their mistreatment or oppressors? Because they not only have a host of cultural influences telling them everything is ultimately fine but also an endless trove of cultural opium they can turn to forget the undesirable conditions under which they live. Art can influence opinion and nullify it—a false sense of comfort vindicated by transient and mind-numbing comfort.

However, this sort of cultural influence is not confined to film. One of the most fascinating cases of political weaponization of art occurred in the post-war mid-twentieth century. Under Stalin's wildly tyrannical and terrifying reign, the USSR rejected (and violently repressed) all forms of painterly expression other than Social Realism. While there are incredible works of Social Realism, like those of the Mexican Muralists (these, of course, were chosen by the artists and not prescribed by the government), it became a hallmark of artistic censorship under Stalin’s vicious thumb. Abstraction, Surrealism, Dada, Cubism, and pretty much anything else was absolutely prohibited. Under pain of death, artists were forbidden from producing work that did not adhere to the figurative class-focused parameters of Social Realism. Simultaneously, the United States was waging its own (and far less oppressive) artistic war. United States intelligence services seized upon the burgeoning ascendence of Abstract Expressionism. Recognizing the propaganda potential embodied in the radical creative freedom of Abstract Expressionism, the United States actively championed its rise as the antithesis of soviet censorship. Again, I am not making value judgments or drawing direct comparisons but simply highlighting the utility of art as a political tool.

No art should be judged solely on how it has been deployed as propaganda, but we should never forget the immense power it can wield.