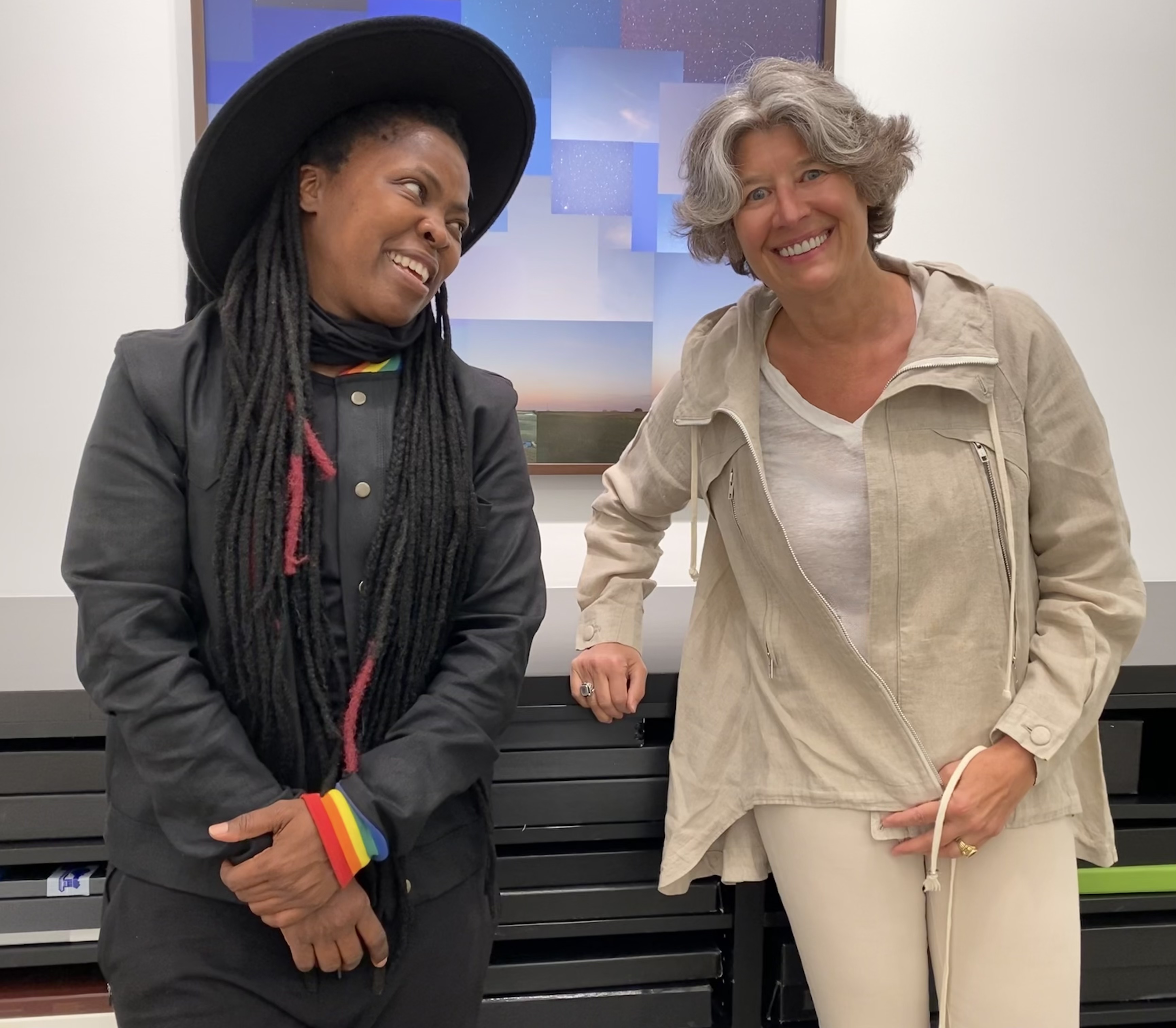 Linda Ginsberg, the founder of Ginsberg Partners a legal recruiting firm, talks to us about her love for art, how that love was inspired by her family and informs her collection, and how living with and amongst art and artists is its own reward.

What role does art play in the family?

I grew up in a family that valued aesthetic beauty but allowed for different styles. My grandmother collected modern art, which skewed toward minimalism, and my mother was interested in more traditional design, which manifested as all color all the time. I've now shared my sense of aesthetics and passion for art with my kids. One son then created a series of sophisticated wood sculptures I display proudly in my home. The other son says art is ridiculous and each of my purchases is another outfit of the Emperor’s New Clothes. All views are welcome. The point of art is to make us think and talk and think again. 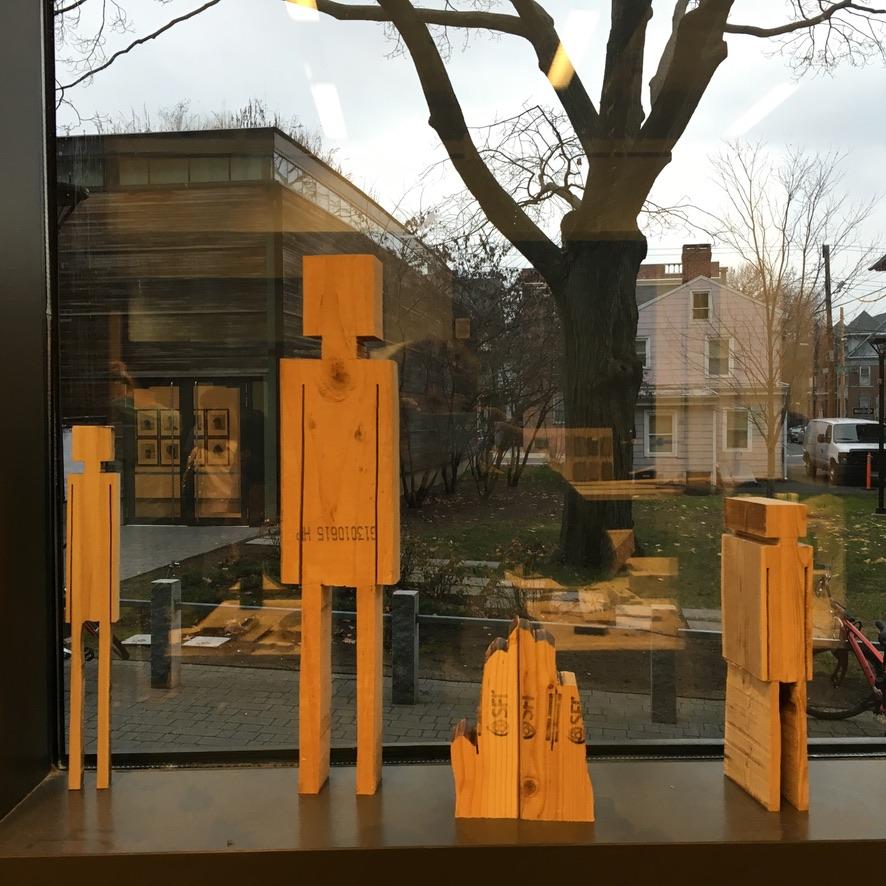 What was the first work of art you purchased, and what did you learn from it?

I bought my first work worth mentioning in 1988 in Soho. At the time, Soho was the epicenter of the New York City art world, and the energy and creativity were intoxicating. I worked at a major NY law firm, and the head of the mergers and acquisitions department was a devoted collector. He would give talks on contemporary art and take young lawyers to the latest galleries.  We all felt the buzz and it inspired me to go out on my own one day and purchase a large painting (say 4x8 feet). I justified the cost because I lived in a cheap apartment and considered the painting analogous to the price I would have paid for an actual view. I still have a soft spot for that painting, but I acquired it on pure impulse without knowing anything about what I was buying. Had I actually listened to these lawyers, who knew a lot more than I did both about law and about art, it’s possible I could have become a terrific lawyer or bought a fabulous painting, such as a Basquiat, that would have allowed me either a lucrative career or a luxurious retirement. Instead, today I continue to work as a head hunter for lawyers, so the joke’s on me. But perhaps I did learn over the years to know what you know, know what you don’t know, and do what you are good at. And today I’m a good enough headhunter to be a happy art collector.

Collecting need not necessarily be pursued as an investment, but is that part of the fun in it?

I have never bought a piece of art for investment, but I have certainly invested in the careers of artists – and that is the most fun of all. A favorite example is my friend Harold Ancart, whose site-specific work I purchased in 2011, when he was literally a starving artist, poor, hungry-skinny, and living in his cold studio. It is raw black pigment thrown directly on the wall, an example of which I saw in the said studio, where it seemed to belong. (You can imagine the reaction of my doubting son, described above.) This piece in my apartment was the first (and possibly only) time Harold employed the technique in a private home. He was shy and insisted that everyone leave while he created the work. When I moved several years later, Harold offered to “reinstall” the work in my new home. He showed up at my new apartment with three assistants who carried all the materials, moved the furniture, and erected a vinyl cage around the site. Harold then changed into a  jumpsuit and gas mask and created the masterpiece that now defines my collection. Harold would not let me pay him. 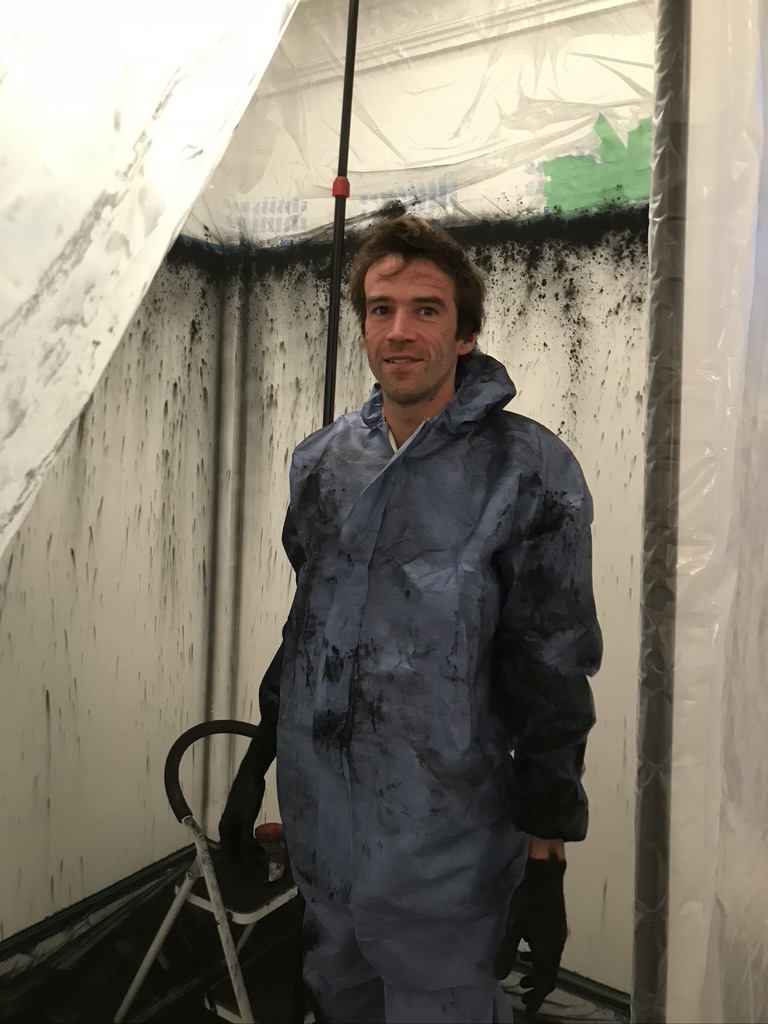 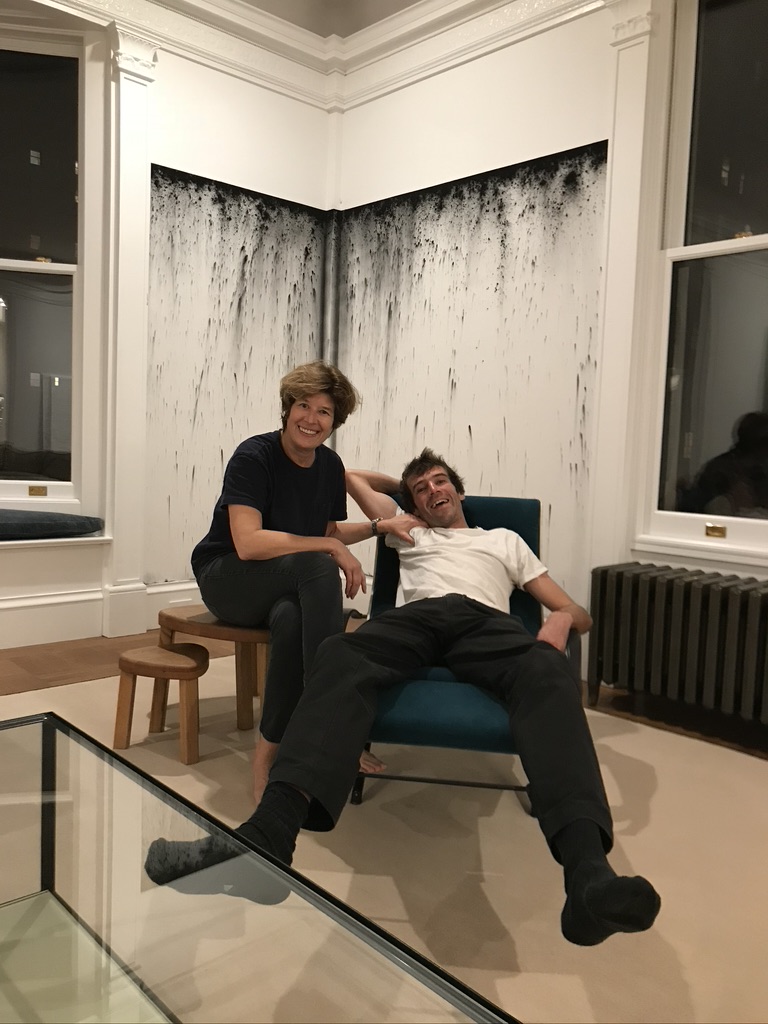 Linda Ginsberg and Harold Ancart after he finished the work behind them in 2017.

Fast-forward to the Fall of 2020, I went to Harold’s show at a major New York gallery and was thrilled by the energy of what felt like a post-covid buzzing scene, the tremendous recognition he had achieved, and how much his work had increased in value. Most importantly, I flat-out loved the paintings and couldn't resist buying one, despite its being the most I had ever spent on a single work of art. A few days later at lunch together, Harold put his hand on my arm and said, "Linda, I just want you to know that you don't have to support me anymore." I laughed and said, “Harold, I know how much the painting cost and how much you are making. I bought this painting because I absolutely love it.” 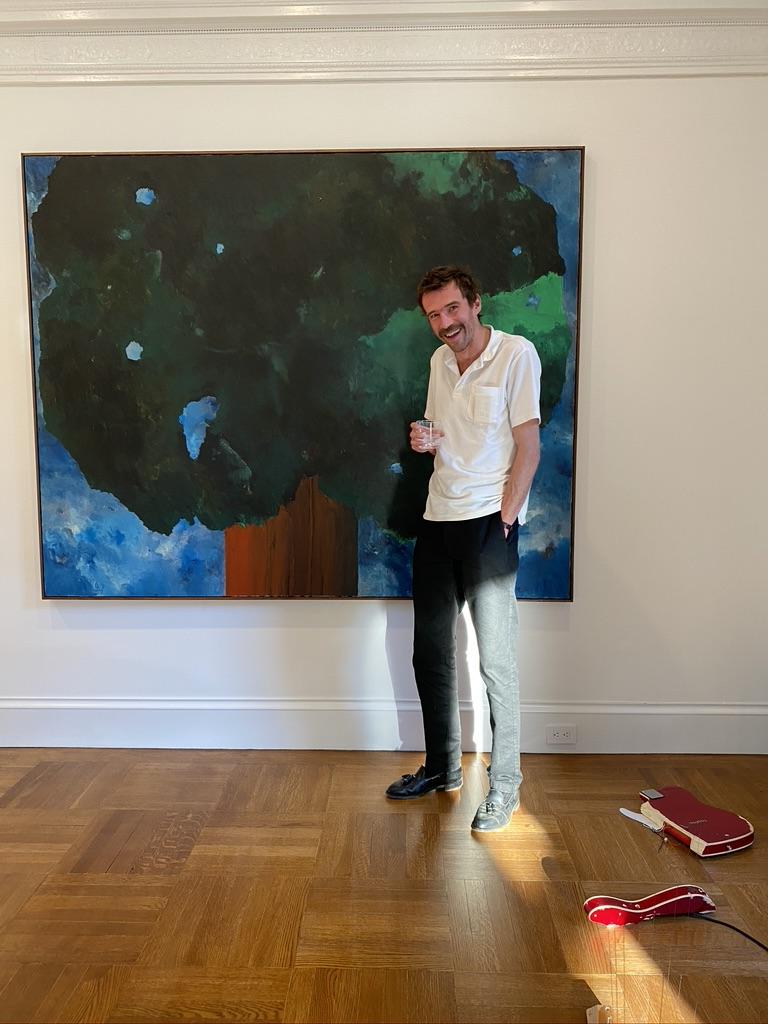 What inspires your love for specific works?

Having a personal relationship with the artist helps me relate to their work, but the work can have its own direct message as well. For example, during the lockdown, I saw many museum shows online, including a stunning solo show at the Tate Modern in London by Zanele Muholi. Mulholi is an outstanding photographer and visual activist focused on documenting and celebrating the lives of South Africa’s Black lesbian, gay, trans, queer and intersex communities. The show at the Tate displayed an enormous range of portraits of people who not only have not been represented in museums, but who in so many ways have not been seen at all. The show inspired me to buy two self-portraits of Mulholi that highlight the resistance and existence of people living proudly in the face of oppression and discrimination. When I finally met Mulholi and talked about the specific images, their experience and mission became that much more personal to me. They joined me at my Gay Pride Parade Party later that week in NY. 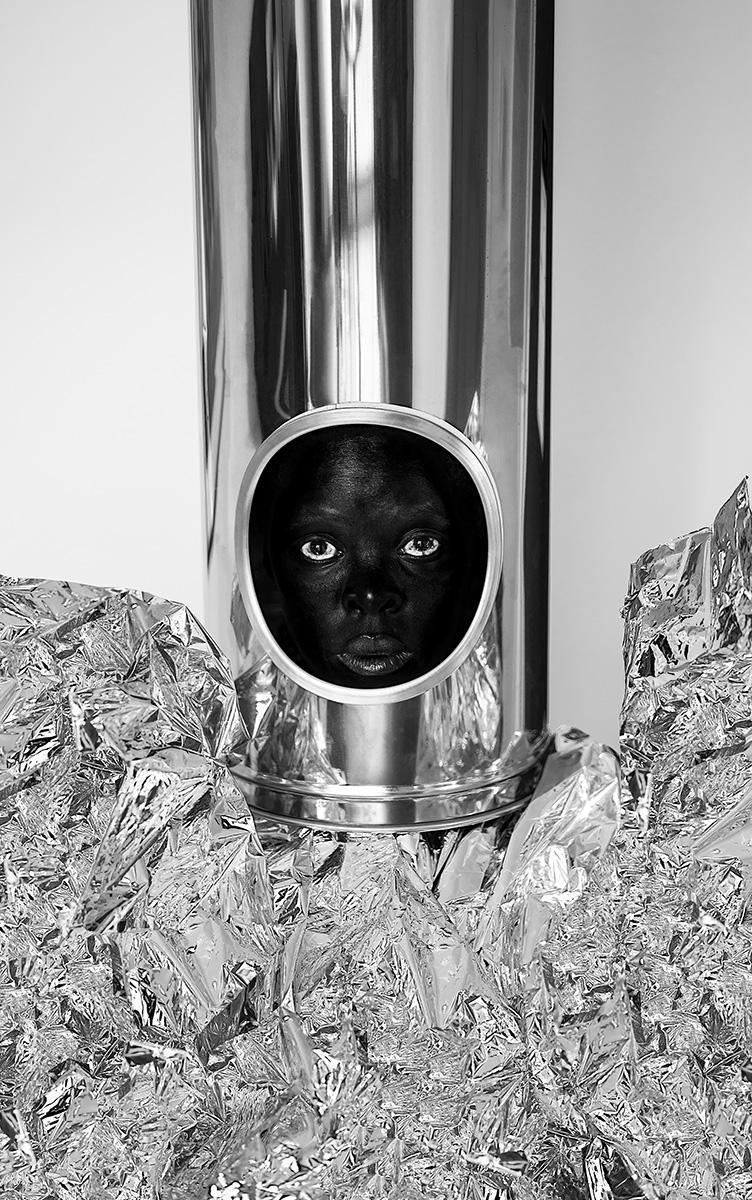 Is meeting an artist mandatory for collecting them?

I am definitely more interested in artists I can get to know because understanding them is another way to understand their art and vice versa. For instance, I recently went to Dakar, Senegal for the Dakar Bienniale, and there was a tough anti-colonialist photograph/collage that jumped out of the exhibition and totally spoke to me. So I asked a local art aficionado about the artist and how I might learn about his available work. Within three hours of seeing that piece, I was on the phone with the artist, Modou Dieng, talking and laughing and committing to buying the work and meeting live. I then went to the studio of a friend of Modou’s, Douts Ndouye. I loved Douts’s work too and bought a few drawings. Douts shipped all the work. A few months later Modou came to my apartment in NY to meet me and see the installation. We hung out three days seeing art, listening to music, and going to an opening of a fashion designer. Hanging with Modou inspired me to buy another painting by Douts. That painting is still in the crate Douts built – the crate itself is so personal, the way he hand-wrote my name and phone number and drew figures pointing up and down, it is a work of art in its own right and I can’t yet bear to open it. 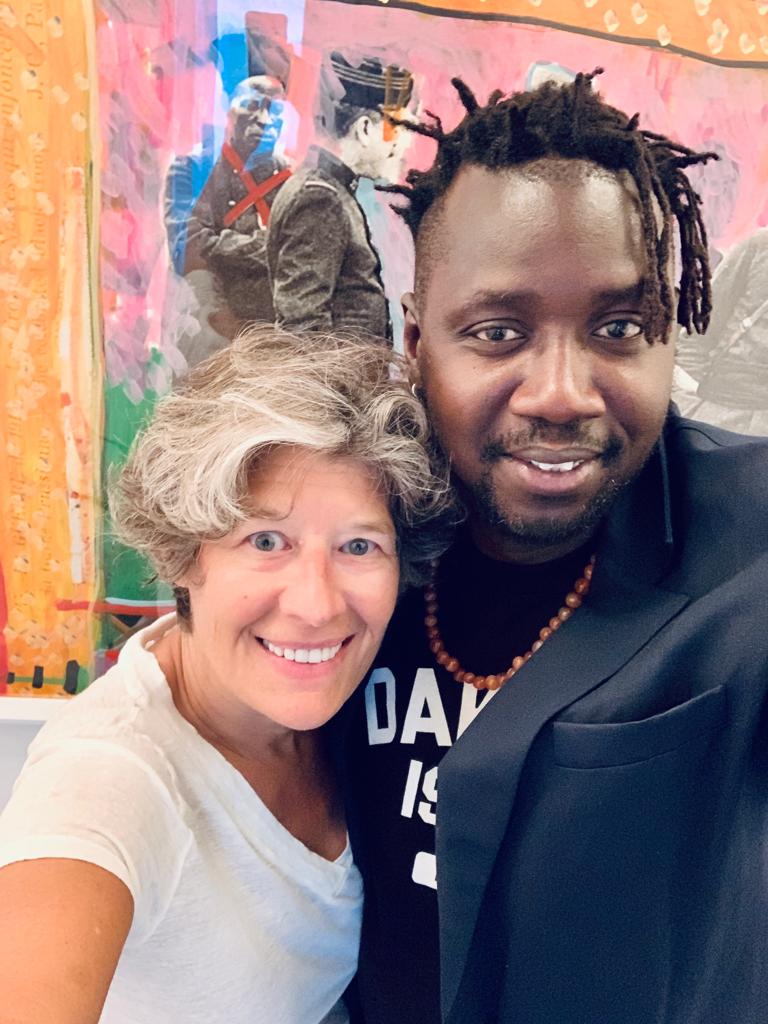 How do you go about curating an art collection? Is there any framework or criteria you follow?

My biggest conflict with collecting is my appreciation of minimalism butting heads with my appreciation of art. I hate an over-cluttered house, but I can’t not acquire art, so I try to restrain my collecting to works I can visualize hanging. I fail. If I bought works as investments, it might be easier because I could sell them at some point, but I buy them out of love, and love can take up a lot of space. 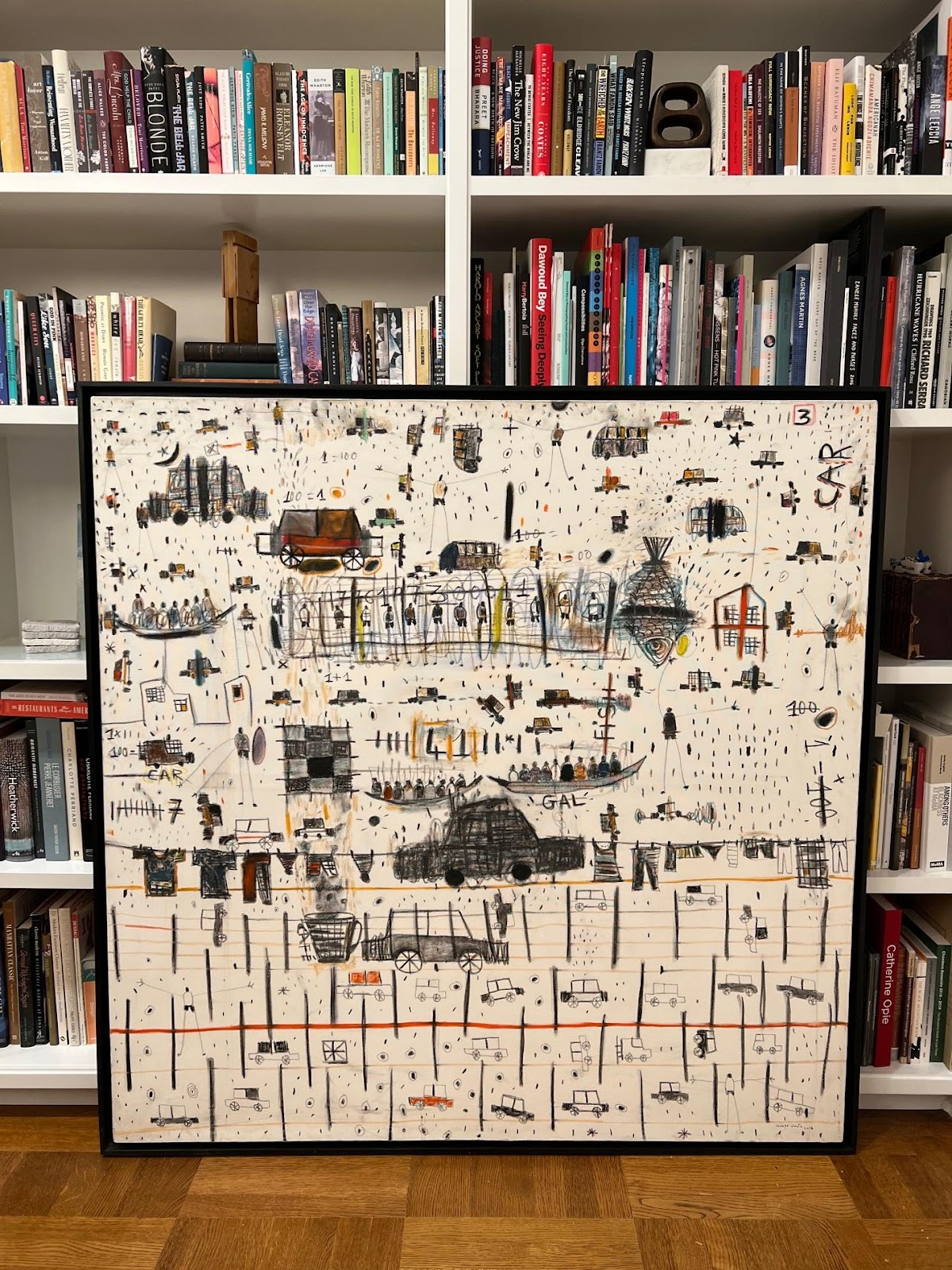 Douts Ndoye, Untitled pastel on canvas, 2014, awaiting a treasured spot in which to be hung.

For you, what determines the value of an artwork?

As someone who spends time professionally with lawyers who are smart, capable people who lean toward the logical side of life, the ability in my free time to be around artists who are big, broad thinkers and are a springboard for other speculations, is extremely rewarding. An individual work of art is an embodiment of that value. Ultimately, for me, art is a launching pad to consider the world differently; if an artist or artwork inspires expansive thought or feeling, that is the highest value.

This may be a difficult or impossible question to answer, but are there aspects of your collection philosophy that set you apart from other collectors you know?

I hosted a charity art event at my apartment some years ago, and a curator remarked, “oh, wow, you obviously buy art that you love." I believe he meant this disparagingly because I do not buy whoever is hot at the moment. In contrast, some collectors employ art advisors who can suggest work that might have a higher value in certain circles (including international art markets, which is no joke).  I have never used an art advisor because I prefer to let my own instincts guide me – all the way away from the bank in some instances, as discussed above when I bought something cute instead of a Basquat. Today at least, if I am considering something expensive, I have a friend who is a Really Big Deal in the art world, and if I ever want to be talked out of buying something, I just call her. Thank you RBD, you know who you are!

What are the biggest mistakes a collector can make?

Buy art you love, make friends with artists, think deeply & broadly, and keep art world experts around for when you need a measure of sanity.

FANTASTIC insightful interview.. Michael !!! I appreciate how you spearheaded the relevant questions to the collector's experience, meaningful interaction, philosophy, and her personal journey. It's also encouraging that LG does not use art advisors in most of her purchases, as the artist's narrative and rapport determines her connection to her collection. Obviously in spendy purchases, she would consult with someone whom is a huge player because it becomes an investment (at that level) even if you are passionate about the piece... Keep up these awesome articles!