Acrylic, Oil and Tar on Canvas.

Lying somewhere between abstraction and figuration, Forbidden is a visual feast that showcases a wide range of styles from various 20th-century artistic movements. At first glance, the viewer is overwhelmed by the painting's abstract elements. Freewheeling drips of paint, hearkening back to such Abstract Expressionist painters like Joan Mitchell and Willem de Kooning, vie for our attention with brightly colored, playful, and gestural brushstrokes that coalesce into an exciting and seemingly chaotic composition. Further reflection, however, reveals figurative forms beginning to emerge from their abstract surroundings. A fiery shooting star hurtles down the right side of the painting, while an amusingly cartoonish face, wearing something which can best be described as a blue witch's hat, stares wide-eyed at the flaming orb. The face is reminiscent of Jean-Michel Basquiat's graffiti-inspired paintings, whose loosely painted and exaggerated human forms lend a degree of accessibility and levity to his work.

As the figuration begins to materialize, the formally abstract elements of the painting start to change; the pair of blue circles on the upper right corner transform into eyes. The dual ovals on the center-left—which previously appeared as mere painterly flourishes—are transfigured into comically large ears adorning the figure of an anthropomorphic dog wearing a striped soccer referee's uniform. The dripping oil paint extends in both directions and its brilliant red lines, reaching toward the top of the painting, bring to mind flames lapping at the sky.

The influence of Basquiat is undeniable in Forbidden’s seamless blending of carefully controlled yet expressive abstract gestures and intentionally rudimentary figures. It seems the work of an artist who is simultaneously a novice and a master of their craft. The subjects’ often cartoonish appearance is reminiscent of Basquiat’s contemporary George Condo, who creates complex and occasionally grotesque satirical paintings that distort the human body. The figures also recall the crude and primal subjects of Jean Dubuffet’s paintings of the early and mid-20th-century. Dubuffet shied away from traditional aesthetic ideals in favor of so-called "low art," a humanistic and expressive portrayal of people, anchored more in the tradition of folk art than classical portraiture. This is not to say that all the subjects are subversive caricatures, indeed several draw inspirations from markedly different sources. The black circle that dominates the upper half of the painting contains a ghostly figure who appears to be floating through the air; clothes (pajamas?) hanging off an invisible body and engulfed in darkness. Fans of Lucian Freud's sinister portraits will instantly notice the similarity between his spectral subjects and the headless phantom haunting Forbidden’s animated canvas. Likewise, the hunched-over figure, in the lower center, recalls the languid and elongated subjects of Henri Matisse’s renowned collage series, The Cut-Outs. It would, however, be an injustice to focus only on Forbidden’s figurative elements without giving abstraction its due.

Allusions to various abstract painters and movements are present throughout the work; my favorite of these is the tiny tribute to Piet Mondrian’s geometric painterly investigations of color, in the form of the blue, yellow, and red rectangle in the center of the canvas, directly over the hunched figure. Color plays a central role in Forbidden. It is as much a love letter to color as it is to the work of any artist to whom it pays homage. Liberated and wild brushstrokes overlap, dense swaths of pigment give way to lightly painted areas through which the white of the canvas can be seen; long drips of paint are juxtaposed against thick impasto, and all are brought into a tumultuous harmony by a kaleidoscopic palette dominated by reds, blues, yellows, and white.

The painting’s meaning is as varied and open to interpretation as are its subjects. What does “forbidden” refer to? Is this a depiction of hell, the final destination of the forbidden, or is it an ode to all-consuming and unbridled joy, something which all too often feels forbidden? Does it chronicle the end of the world or simply the chaos of day-to-day existence? Is it a nightmare or a light-hearted daydream? There is no one answer; instead, the painting is whatever each person finds in it. Like the arrows interspersed throughout the bottom center of the composition—that send the viewer's eyes darting in every direction across the surface of the canvas—there are a multitude of paths one can take in understanding Forbidden. Humorous or foreboding, a celebration of life or an evocation of destruction, abstract or figurative; all are present, and all are possible. It’s up to you!

Forbidden is a painting that offers visual engagement and discovery well past the viewer's initial interaction with it. In short, you won’t grow bored by it, I promise. Save to Collection
Acacia, from the series "interior paintings with flowers" Save to Collection
Pacific Beach Save to Collection
Yellow Dragonfly with haiku 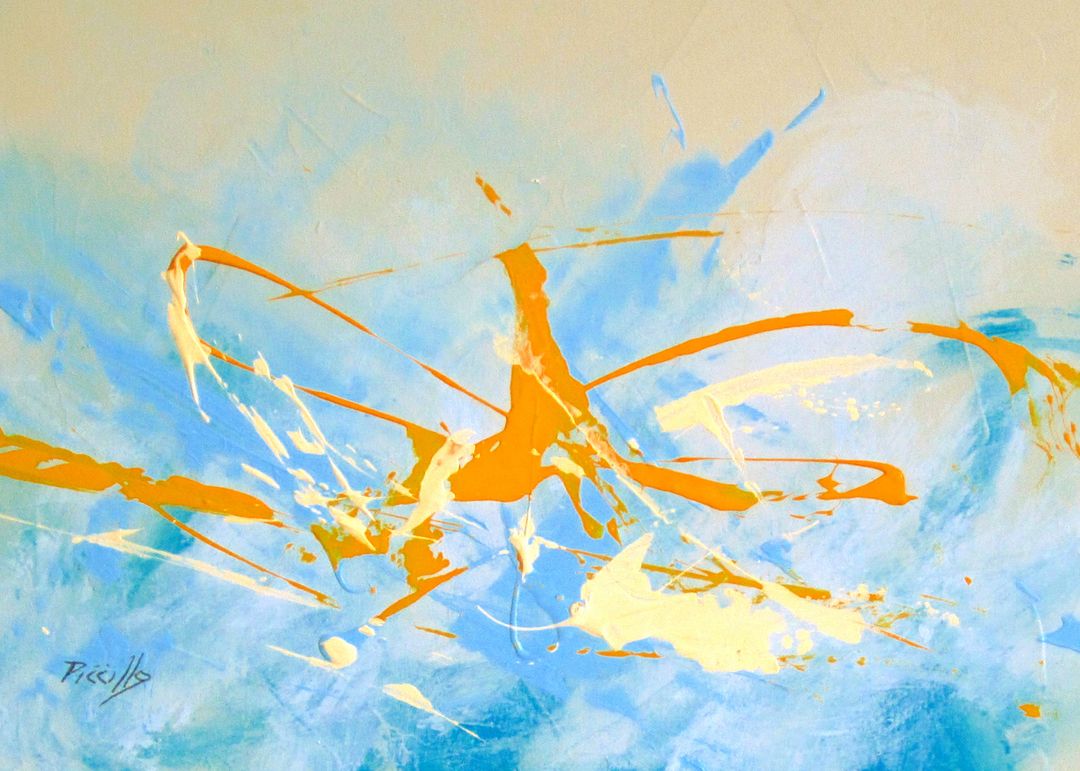