This abstract painting on canvas is reminiscent of a stack of records ready for the turntable. Sometimes I long for the good old analog days. Glad I grew up before computers and the internet!

Are they just a bunch of lines? Are they a collection of vinyl records, as implied by the title? Or are they a metaphor for a simpler world, where there were rotary telephones, roll-down car windows (yes there was such a thing), phonebooks, cassette recorders, and vinyl records? Or all of the above? We don’t know, and this layered meaning is part of the beauty of Jodi Fuchs' painting, Record Collection.

On one hand, Fuchs’ lines suggest objects from vintage popular culture. The title Record Collection leaves no doubt that this painting is about albums, a ubiquitous part of the mid-twentieth-century culture. It is exactly what we think it is- a bunch of record covers. And it’s easy to visualize that this is a row of LPs lining a shelf because the multicolored lines are reminiscent of just that. A mass-produced commodity has become the subject matter of this artwork. As such, Fuchs infuses her work with elements of 1960’s Pop Art. She uses mundane objects (records) and includes them in artwork. Pop Art rejected previous historic subject matter, such as scenic vistas or portraits. Think Andy Warhol soup cans. It aimed to portray mundane, commercial subjects in fine art paintings. These artists took popular culture, usually designated to ‘low art,’ and presented it as ‘high art,’ like Fuchs seems to do. Unlike Pop Art, though, Fuchs’ images are from the past, adding a twist to the already ironic images of Pop Art.

On the other hand, as you look at these gestural lines, they could easily seem to become untethered from reality. They veer into the world of abstraction. What you perceive might not be albums at all but could be a rainy day or a forest in the Spring or congested highways. It’s easy to get diverted from a concrete image of records to imaginary, unconscious thought. This is the realm of Abstract Expressionism, an art movement that came on the heels of World War II in the 1940s. Prominent members of this art movement include Jackson Pollock and Mark Rothko. Abstract Expressionism emphasized the spiritual in art. It used abstraction to speak this emotional language. Pop Art was in part a reaction to the expressive new Abstraction, as it was devoid of emotion or spirituality. Abstraction could become whatever the viewer sees. And in Fuchs’ piece, there is a sense that those energetic lines seem to jump off the page. They seem to be gyrating and dancing to their own music.

Fuchs’ comments reveal the role of expressive lines and stripes in her work. She seems to use the unconscious in her work, like the Abstract Expressionists. She states: “There’s something about creating order out of chaos by painting lines that I resonate with...they speak to vibration and frequency and orderliness.” The vibration and frequency in these lines make it all the more tied to music. It’s easy to picture the vibrations of the jazz instruments, as this painting sits on a living room wall.

And there is yet another layer to this painting; it’s also about nostalgia. As Fuchs says: “Sometimes I long for the good old analog days. Glad I grew up before computers and the internet!” In a world of globalization and digitalization, sometimes a journey to the past is like a soothing balm. And some of those vintage objects, like vinyl records, are making a roaring comeback. This speaks to a wistfulness for elements from the past. These old-fashioned commodities can provide comfort, solace, and even a retro-chic vibe. You might prefer the tactile experience of music, kind of like reading an actual book. That might include a preference for audible scratches rather than sterile digital sound. Or you might picture your albums all lined up on a shelf, only their colorful covers visible as thin stripes. This painting takes the viewer back to another world, where things were simpler. It’s a place where music crackled due to the imperfections of the vinyl record on the turntable.

There is no doubt that Fuchs’ painting, Record Collection, has many intriguing layers. It’s more than vivid contrasting colors or textured brushstrokes. It’s like discovering treasures buried in the soil. It alludes to Pop Art in its subject matter and semi-realistic portrayal. On another layer, it delves into Abstraction with its expressive, gestural lines. Those lines, with their vibrations, seem to dance to the music. And this work exudes an aura of nostalgia. It captures the simplicity of the past and might be a veiled statement about the scary reality of the world now. But most of all, it makes you want to put on that music (whether digital or analog) and dance.

Thank you so much for your thorough and thoughtful reflection of my work! 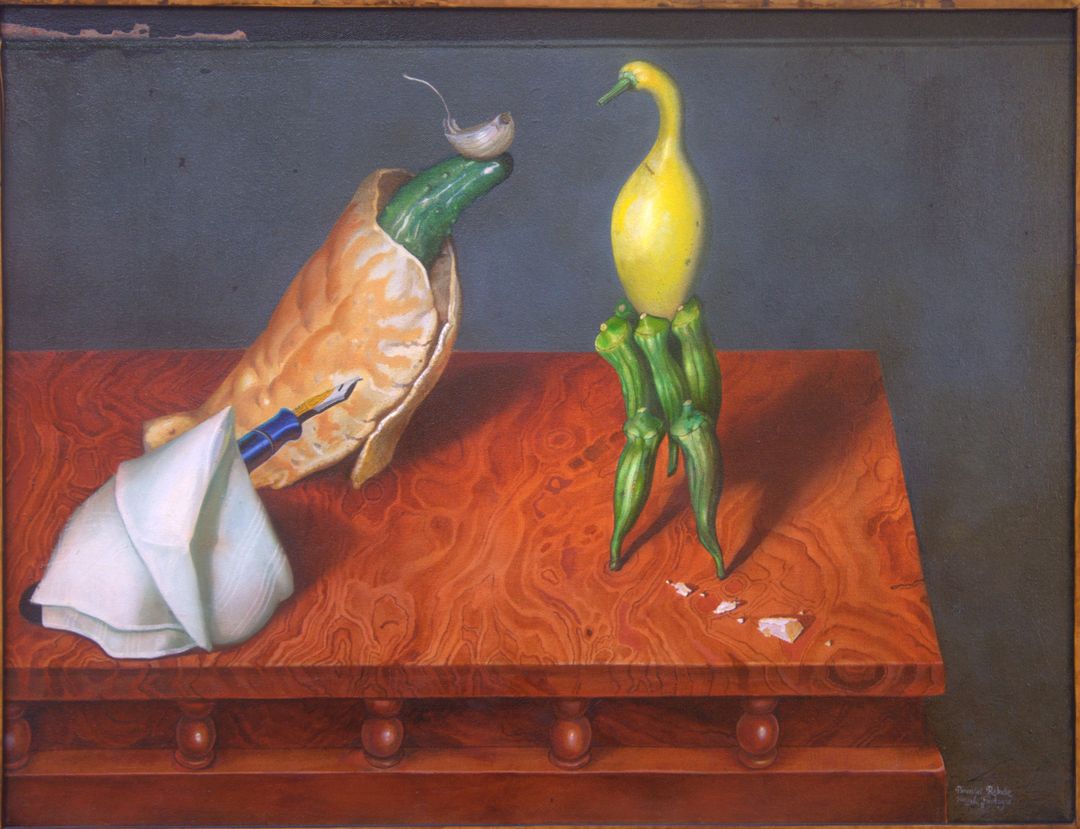 Save to Collection
Anonymous Landscape: Obtrusion

Save to Collection
Icy pond Save to Collection
Simple bridge and flower