SHOOT PORTRAITS NOT PEOPLE USES RECYCLED CAMERA EQUIPMENT TO CREATE ANATOMICALLY CORRECT WEAPON SCULPTURE. THE FINAL PRODUCTS ARE INTERACTIVE AND POWERFUL INSTALLATIONS THAT COMMENT ON THE VIOLENT ABUSE OF THESE ARTFUL MACHINES, WHILE CLEVERLY EXPOSING THE SHARED VOCABULARY ASSOCIATED WITH PHOTOGRAPHY AND WEAPONRY. ALL FIREARM SCULPTURES ARE 1/1, HOWEVER, LIMITED EDITION PRINTS ARE AVAILABLE IN TWO DIFFERENT SIZES FOR EACH GUN.

SHOOT PORTRAITS NOT PEOPLE’s GUN #004 PRINT (LARGE) is a difficult work to write about because it offers so many avenues of exploration.  I think an interesting place to begin is the history of film and technology it contains.

Unsurprisingly film is associated with technology more so than any other medium. The advent of the moving image was a tremendous scientific advancement, but this is only the most surface-level association. Two massive technological advancements are used as metaphors for film: trains and guns. A projector runs film of a track like trains. The illusion of movement that defines film is the frame break. 16 to 18 frames, separated by evenly spaced thin black lines (frame breaks), are projected each second (film is now 24 frames a second, which is why silent films [16-18] look sped up). The rapid succession of images separated by imperceptibly quick moments of black create the illusion of movement. This interaction is reflected in the way light streams through the film-frame-like windows of a speeding train. Then, there’s guns.

The language of film is inextricably tied to guns. In filming every documentary I’ve made, my collaborator and I constant yell, “Shoot her!”; Shoot that bus!” “Did you shoot those people running?”. If anyone only had the audio, I suspect we would sound like to very bloodthirsty people. You load a film camera, and you load a gun. You aim a camera (and focus your lens), and you aim a gun (and focus your scope). These connections are obvious. The important connection is their use. Because, film is a weapon (and all art for that matter). Clearly you can kill people with guns, but a well-placed camera and a director with a purpose can be just as deadly as any firearm.

As we all know, moving images can be manipulated and manipulating (think deep-fakes), but film has an inherent trustworthiness that no other medium touches. Particularly in its early days, film’s ability to photographically capture the world gives it a veneer of reality and truth, which acts on our brains even if we try to remain skeptical. When Leni Riefenstahl (a devote Nazi and, unfortunately, brilliant filmmaker) made Hitler’s most famous and effective propaganda film, Triumph of the Will she terrified the world and created countless fascists overnight. The two-hour “documentary” (even to this day) makes Hitler and the Third Reich seem unstoppable and inevitable. Part of Hitler’s initial political success was due to these evil yet expertly made propaganda films that both drew people to his barbaric ideology and created the lie of invincibility. Now that’s a very very deadly film. Millions of people were shot with bullets, in part because of Riefenstahl’s dexterous camera shooting. Art is one of the most beautiful tools for peace, and the among most deadly weapons of war.

SPNP (or Jason Siegel from a quick Google Search), I must say this is the most striking work I have come across on this platform. But what is more subjective than my own taste? Congrats. Your ability to convey a broad conversation through such a clean photograph of a “weapon sculpture” is refreshing and creates a lot of space to navigate. I will note that this is a printed edition photograph of the work (a well done print at that), but I would like to focus more on the physical sculpture.

Firstly, I commend the aesthetic value of this piece. The composition is well thought out, it is visually striking, and combines two iconographic motifs everyone is familiar with; especially by retaining the Kodak logo. If only George Eastman was still around to see such revolutionary expression. There is a certain history museum quality that this (and others you have shown) give off, creating a curatorial aesthetic that feels close to a hyper-patriarchal, antique war memorabilia head space. I can almost imagine myself grabbing one of your weapon sculptures and storming Normandy, or catching my reflection in the scope as I plant the flag at Iwo Jima. Comically charismatic, with a strong scent of patriarchy and morphine. After googling your show at EVOKE Contemporary, I cannot help but start to think about how much photography impacted the Second World War, as well the Second Indochina War. The Willys Jeep piece really did it for me. Now I cannot stop thinking about playing Army Men Sarge’s Heroes on Nintendo64 when I was a child (some Freudian, Lacanian message there as to why this piece stood out to me out of all the works on Altamira).

From the sociopolitically perspective, this work grazes the fields of many different farms of thought. One could rabbit hole down the more obvious and current narrative surrounding American gun control policies, and the controversy that the imagery of compact assault rifles bring. Or one could eclipse that narrative by interjecting that the camera is no different than a weapon of mass destruction; both encapsulating the violence and difficulties that modern societies have faced with the advancement of technology. Cameras and weapons, have been at the forefront of modern war and violence, rapidly manifesting a new way that society see’s the worst parts of our collective whole. One destroys history, while one captures it eternally. Now, It is quite obvious that this metaphor is present in the piece, creating a revolutionary aspect that is captivating and raw. But, I would argue to try take this step forward, and really think about what the “modern” camera is capable of, and not just the formally successful juxtaposition of such. The camera has transcended tremendously in the last twenty years, perhaps imagine these works that can “fit in your pocket.”

Without a doubt, you have a successful and unique eye for creating shocking imagery, but is the awareness associated with the links between weaponry and photography the end-all? Or is there a possible breakout that could transpire, and inspire further, more precise conversation?  Otherwise the work (works, if a series) could come off as the younger generations put it, “hype” or equivalent to “fast fashion”, with a direct association to the history of high-shock value art (to be taken with a grain of salt).

I do not want to come off as undermining the brilliance of this piece, as in the cap-locked description, you mention, “The final products are interactive and powerful installations that comment on the violent abuse of these artful machines, while cleverly exposing the shared vocabulary associated with photography and weaponry.” If this statement is still current, I would love to see how you are utilizing such profound works in an interactive context. As a quick google search only brought up a gallery space displaying the works. In other words, investigate what worked in that show, and what did not, from all perspectives. You are in a strong place, and have been, but I believe there is another level you could bring this to a level beyond the shock.

Speculatively speaking, I believe the piece is high-brow, and could end up in great collections, museums, and even camera or gun enthusiasts hands. The time you have taken to assemble such exact replicas is commendable “comrade”, and deserve a place to exists as objects of violence. As Girard said, “Violence is the divine force that everyone tries to use for their own purposes and that ends by using everyone for its own…”

Some questions I always ask students, and myself, is “why am I making this work, what do I enjoy about this work, and why do I dislike this work”? You would be surprised (unless you disregard critical thought while creating work, although it seems you are quite critical at a high capacity), at how many artists vaport about act of being present while creating.  This can come off as simple and critical, but it is always the first step in honing in towards a more concise and meaningful investigation. I argue that formalism (in todays sense) is a trap that some of the best artist of the twenty-first century fall into. Don’t let the works become a byproduct of what is wanted, but rather let it become a work that is rejected. Once again, you are in a great place Jason, and I will definitely be keeping you on my radar in the coming years. If you ever want to chat, please reach out!

The vintage nature of many of the camera elements only serve to make this piece even more interesting.

This piece is incredibly thought provoking given the current state of the world. Obsessed 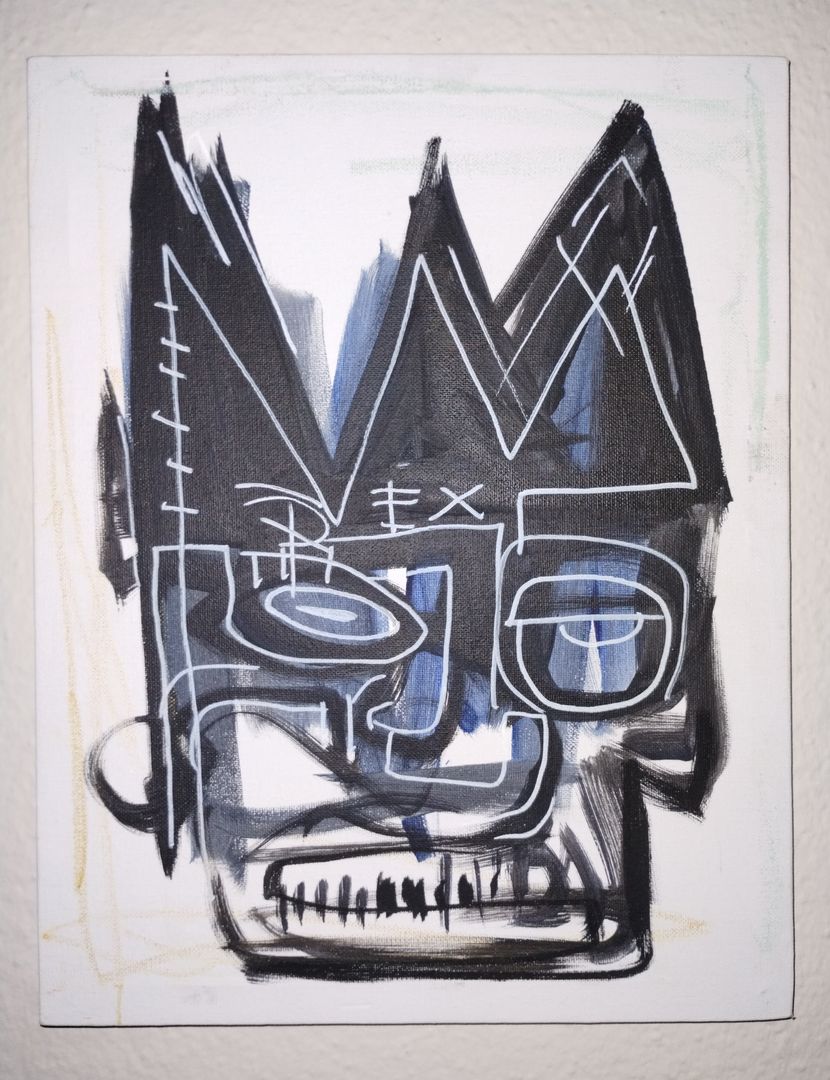 Save to Collection
Fourth of July over Manhattan Skyline

Save to Collection
Worth Every Breath Save to Collection
Taylor Mead